Earle Page (1880-1961) was prime minister for only nineteen days after the death of Joseph Lyons, yet he was a significant figure in Australian public life. A highly-regarded surgeon before he entered federal politics in 1919, he was a founder of the Country Party in federal parliament, and as party leader in 1923 was largely responsible for the coalition between anti-Labor parties. As Treasurer, he established tied Commonwealth grants and the Loan Council, forever altering the relationship between federal and state governments. In 1939 he made an intemperate attack on Robert Menzies, and his influence waned after Menzies came to power. However, as minister for health in the governments led by Menzies after 1949 he implemented major reforms in the medical sector.

Prime Minister Stanley Bruce holds the first federal Cabinet meeting in the national capital, at Yarralumla House. In 1931, at the depth of the Great Depression, Cabinet begins meeting in the federal parliament building (now Old Parliament House). The location of Cabinet within the parliament signifies the growing power of the Executive branch of government over the elected parliament during the 20th century. 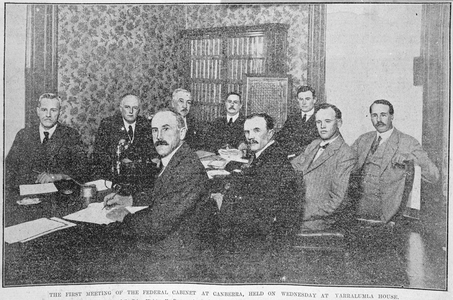