Gordon Munro Bryant (1914-91) was a school teacher and Labor member of the House of Representatives (1955-80). He presided (1957-64) over the Aborigines Advancement League (Victoria) and campaigned for the ‘yes’ vote in the 1967 referendum on Aboriginal citizenship. As Minister for Aboriginal Affairs (1972-73), he argued that Indigenous Australians must have autonomy and a sense of control over their destiny.

The ‘67 Referendum poses two questions: the first seeks to alter the balance of numbers in the Senate and the House of Representatives. The second question asks whether two references in the Australian Constitution which discriminate against Aboriginal people should be removed. This question receives an unprecedented 90 per cent ‘yes’ vote, giving the parliament the power to count Aboriginal and Torres Strait Islander people in the federal Census and to make special laws for Aboriginal Australians. It is a landmark referendum in the history of Indigenous affairs, and marks the success of a ten year campaign launched in 1957 at the Sydney Town Hall. The Huge Town Hall meeting was organised by Aboriginal activists including Jessie Street, Faith Bandler, Gordon Bryant and Pearl Gibbs. 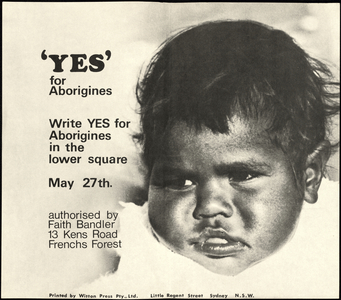