James Cook (1728-79) was a renowned navigator and respected leader of men in the Royal Navy. He commanded three voyages of exploration in the Pacific (1768-71, 1772-75 and 1776-79). In 1770 he charted the east coast of New Holland and, naming the territory New South Wales, took possession of it for Britain. His achievements helped create a second British Empire.

Lieutenant James Cook charts Australia’s eastern coastline and proclaims it Britain’s possession. This marks the first claim to British sovereignty over the Australian continent. It follows the issue by the British Government of the Secret Instructions for Lieutenant James Cook Appointed to Command His Majesty’s Bark the Endeavour 30 July 1768. Cook made three voyages to the South Pacific between 1768 and 1779. 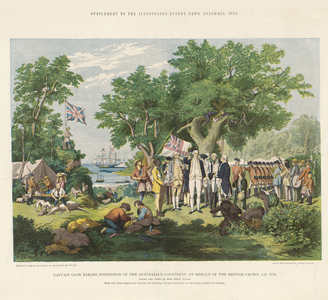