John Macarthur (1767?-1834) was an army officer, entrepreneur and landowner who pioneered the fine-wool industry in New South Wales. He envisaged a colonial aristocracy maintaining convict labourers and keeping them in subjection. His unscrupulous pursuit of his interests provoked conflict with successive governors, and his clash with Governor William Bligh provided the catalyst for the rebellion against Bligh in 1808. Courtesy of Australian Dictionary of Biography

Tensions over power in the new colony erupt when Governor William Bligh arrests John Macarthur, a prominent pastoralist, and refuses him the bail granted by an illegally constituted court. The commander of the NSW Corps, Major George Johnston, deposes Bligh and assumes government of the colony. Macarthur serves as colonial secretary until Bligh is replaced by Lieutenant-Colonel Foveaux. Johnston is later dismissed for his part in the mutiny, while Macarthur is exiled from the colony for seven years. 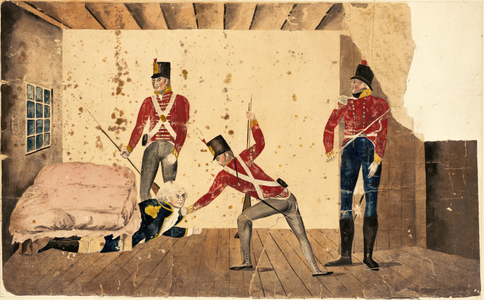