Vincent Lingiari (1919?-88) became a head stockman on Wave Hill cattle station, Northern Territory, and a highly respected Gurindji ‘law boss’. In 1966 he led the station’s Aboriginal employees in a strike for more equitable pay and conditions. When the Whitlam government gave his people control of part of the stationís land, he commented: ‘Now we can all be mates’. Courtesy Australian Dictionary of Biography

Gurindji stockmen go on strike at Wave Hill Station, Northern Territory. They protest against poor wages and conditions, and demand land rights. The Whitlam government negotiates with pastoral leaseholders to give the Gurindji back a portion of their land. On 16 August 1975, Prime Minister Whitlam visits Wattie Creek in the Northern Territory to hand back freehold title to the Gurindji lands to elder Vincent Lingiari. 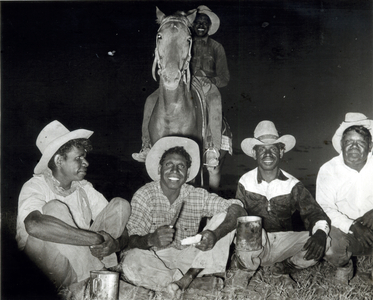